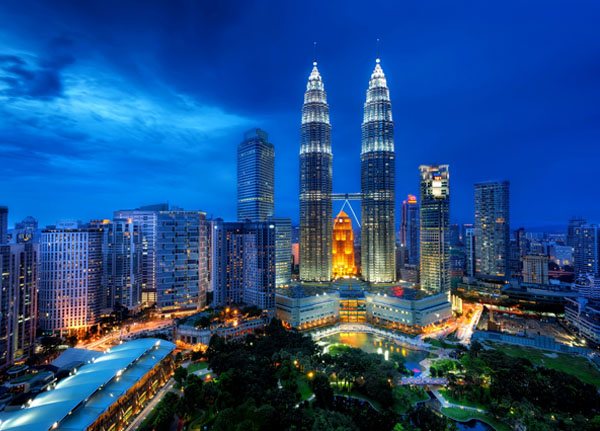 Kuala Lumpur officially the Federal Territory of Kuala Lumpur, is the national capital and most populous global city of Malaysia. The city covers an area of 243 km2 (94 sq mi) and has an estimated population of 1.7 million as of 2015.Greater Kuala Lumpur, covering similar area as the Klang Valley, is an urban agglomeration of 7.2 million people as of 2013.It is among the fastest growing metropolitan regions in South-East Asia, in terms of population and economy.

Kuala Lumpur is the seat of the Parliament of Malaysia. The city was once home to the executive and judicial branches of the federal government, but they were moved to Putrajaya in early 1999.Some sections of the judiciary still remain in the capital city of Kuala Lumpur. The official residence of the Malaysian King, the Istana Negara, is also situated in Kuala Lumpur. Rated as an alpha world city, Kuala Lumpur is the cultural, financial and economic centre of Malaysia due to its position as the capital as well as being a key city.

We are organizing
Conference on multiple cities
Around the world to easy access
To present your papers, Share Knowledge
And visit different Culture, Food, Sightseeing, etc.

About Sri Lanka About Colombo

We are organizing Conference on multiple cities Around the world to easy access To present your papers, Share Knowledge And visit different Culture, Food, Sightseeing, etc.